I want to share with you a personal story. I’ve had a basal cell carcinoma on the right side of my nose for the last 8 years. The docs have been after me to remove it surgically. Instead I’ve been treating it with wheatgrass. Initially, I used fresh wheatgrass, but it was really messy. (I ruined some of my best shirts!) 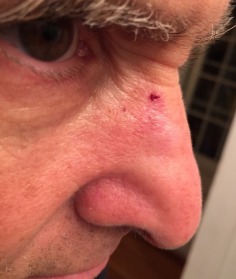 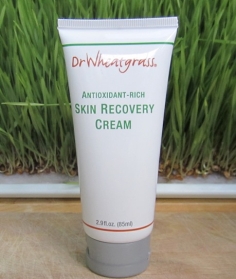 In the photo above (l.), you see the carcinoma starting to bleed. It grows to about double or triple this size and then completely disappears with use of the wheatgrass cream (r.). However, the cell regrows about every 4 months persistently for the last 8 years.

Then I met Dr. Wheatgrass. Yes, he is a real person. Chris Reynolds is a medical doctor from Australia who discovered wheatgrass from one of his patients. He tested it and documented improvements for eczema, psoriasis, rashes, hives, rosacea, acne, molluscum, wounds and ulcerated skin. But patient compliance was low because they had to grow it, juice it and apply it. So he had the idea of extracting the essence of wheatgrass and putting it into the form of a cream that patients could easily apply.

My first reaction was that wheatgrass must only be used in the raw state to get results. But I was wrong. This stuff is so powerful that even after the extraction process, it’s still potent! In this regard, it is not much different than extracting the essence from echinacea, chamomile, ginseng, eucalyptus, all herbs I regularly use. Because this form of wheatgrass was so unique, I started importing it. 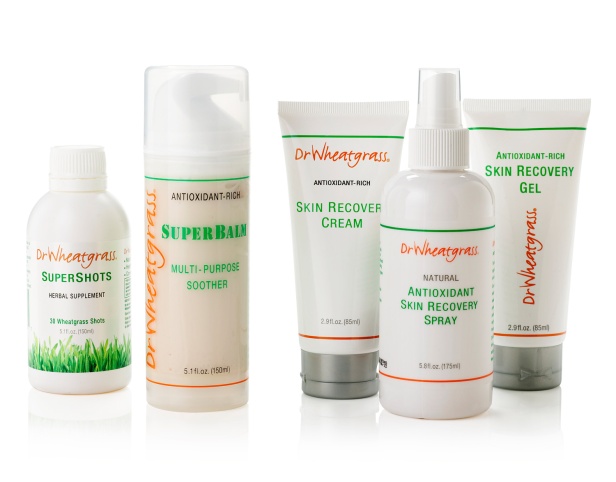 I applied the cream and later the balm to the basil cell on my nose. In about 2 weeks, the sore disappeared. I was thrilled and my dermatologist asked “What are you putting on it?” But after 4 to 6 months, the cancer reemerged. I put more balm on it and the cancer retreated again. This is the way it’s been going on now for 8 years. The wheatgrass balm puts the cancer into temporary remission by removing it from the surface but doesn’t go deep enough to permanently eradicate it.

I went to a different dermatologist who was also impressed at how the lesion was so small after so many years and how, when it was in remission, it could not be seen at all. He also asked: “What are you putting on it?”

But ultimately, he persuaded me that no topical application was going to go deep enough to reach the carcinoma source cells below and that 8 years has proven that. So, I just had it dug out. It took 8 stitches! Now I’ve got a big scar.

Guess what I’m putting on the scar….wheatgrass cream and wheatgrass balm! 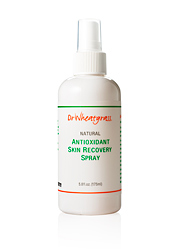 This is my favorite product. Every day, I spray a quick two pumps on my face just as an energy enhancer. It’s invigorating––a wake-up stimulant with a pure and natural essence. I also believe it’s the best after-shave lotion out there. It smells great and soothes the cells that were irritated by the sharp razor. The spray contains the most wheatgrass extract after the balm. And that means it has what used to be called by researchers back in the 1930s the “grass juice factor.” This is an active plant hormone that is responsible for cell growth and tissue repair. It stimulates the skin’s natural rejuvenation process. Most people buy the spray to treat hard to reach areas such as underarm, groin, scalp, anus, and such areas.

A Quick Fix vs Deep Healing

Most skin problems are symptomatic of a deeper problem. Many times the liver and the intestinal tract are implicated and they reveal their imbalance on the surface of the skin. In those cases, the skin is only an indicator. Drugs are typically symptom oriented. They treat the manifestation on the skin surface but not the underlying condition. Wheatgrass, on the other hand, treats the condition on a deeper level. That’s why drinking wheatgrass in addition to using it topically is the best combination. Once upon a time, you had to grow your own and juice it. Today, drinking wheatgrass is easier than ever, especially with easy-to-take, delicious Dr. Wheatgrass Super Shots.

This is a wheatgrass drink alternative. Straight wheatgrass juice is rather strong tasting and some cannot bear it. If you’re one of them, then you’re going to love this drink. Again, as an extract made from fresh, organic wheatgrass juice, it is 25-30% more concentrated. And its cost is under a dollar per shot which is less than half the cost of a fresh squeezed juice. Since you don’t have to do any actual juicing, you can grab your shot anytime, anywhere. It’s safe for children, the elderly, and even during pregnancy and breastfeeding. Kids love it and the bottles remain active for up to 2 years.