I have just finished the last in a long series of talks involving lots of traveling—England, Ireland, Germany, Boston, San Francisco—over nearly four weeks time. I wasn’t sure if I was going to have enough energy left in me to be of good service to the folks at the final venue—in fact, I was starting to feel a little scratchiness at the back of my throat—but thankfully I cranked up the energy and all went well.

A sign in the BART (underground) station advertises services of those in need of medical marijuana. Wow. Maybe this is a hopeful sign that at some point we can get past the political obstacles and let American farmers recommence the growing of hemp so that we could use this renewable plant for making paper, fuel, building materials, carpets, seeds, butter, and oil, and clothing and fabric like my Hemp Sprout Bag.

Just in case you don’t know, hemp and marijuana are not the same even though they are both variants of the cannabis sativa genus or family. Marijuana grows as a small bush and contains lots of THC the psychoactive compound that makes it so famous. Hemp grows in tall stalks sometimes reaching 25 feet in height. Technically hemp contains some THC but only in trace amounts. It has no drug value. Smoking it will only give you a headache. You can buy hemp clothing in the United States, but it must be imported from China and Eastern Europe. At this time, American farmers are not allowed the chance to reenter this lucrative industry because the emotions and politics around marijuana confuse the real difference between these two variants. Legalizing hemp would not increase the prevelance of marijuana. Hemp farmers cannot even hide marijuana plants because the two grow so differently. In addition, hemp actually contains an anti-psychoactive compound called CBD which would ruin a marijuana crop due to cross pollination. It’s time to see hemp for what it is—an agricultural and industrial crop and its legalization should be treated as an entirely separate issue from those who are in favor of legalizing marijuana.

Café Gratitude is an amazing place. The philosophy behind every dish both in the preparation and in the serving is one of gratitude. Their cuisine and their delivery is done with purity and love. Hippyish? You may think so. But it is totally genuine and sincere. Matthew Engelhart and his wife Terces, have created a chain of six wonderful places to dine and learn in the San Francisco/Bay area. But they are more than restaurants. They have created a lifestyle. You must order their I Am Grateful cookbook and check out the board game they invented called the Abounding River game. Check out www.CafeGratitude.com. You won’t be disappointed.

My time at Café Gratitude was brief, but enormously successful. I am told the turnout and feedback was “one of our best.” Shea Lynn Baird put on 47 of these talks last year, so I am humbled and honored at such a complement. Here are some photos with Shea’s husband Steven and with Zhenya who drove 3 hours to meet me!

The New Living Expo in San Francisco was jammed with thousands of health and spirit seekers. I got a massage, an aura photo, a chiropractic adjustment, and an astrology reading on the first day just walking down the aisle! Brenda Cobb who runs the beautiful Living Foods Institute of Atlanta and I spent some quality time together. I also hung out with Michael Bergonzi, “The Wheatgrass King” and Brian Clement the director of Hippocrates Institute in Florida. You can find out more about all three of these living food leaders in my book Wheatgrass Nature’s Finest Medicine.

My talk at the New Living Expo was on how to design a successful juice fast and detox program was a hit. This is part of a 4 session course that I will be offering live in my home area and also online so those of you who are interested in achieving some quality cleansing can get it no matter where you live. Stay tuned for info on the four session online class (or email us if you want to find out sooner). It will be offered in June so get ready for some Spring Cleaning! 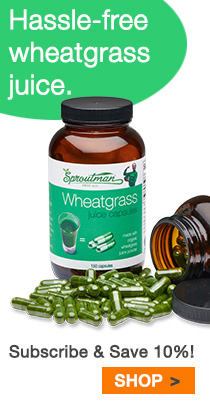